It Hurts So Good

Whatever else you can say about it, MM! pulls no punches when throwing out wacky examples of deviance to comedic effect. It manages be less entertaining than the sum of its parts, unfortunately, but this anime still has enough good points to be worth a watch. Before I explain, let’s rewind a minute for a summary.

Taro Sado is a high school student with a major problem – he’s a masochist, and not just a little bit. Any sudden spike of pain sends him a euphoric state and leaves him uncontrollably pleading for more. This creeps out his classmates, and it has earned Taro such a bad reputation that he’s desperate to shed his mega-masochism (the MM of the title). When he hears of the Second Volunteer Club whose stated goal is to “make students’ dreams come true,” he hopes they may be able to cure him, but their “cure” may be deadlier than his disease. The club is run by a petite but fierce blonde named Mio whose primary treatment method seems to be trying to cure his masochism by awakening his survival instinct—putting him in so much pain that fear of death overcomes pleasure! Along with the club’s other members—a cute girl named Yuno who has severe androphobia, a cross-dresser, an underaged mad scientist, and the world’s least responsible school nurse—Taro and Mio set out to discover whether or not “even if it kills you” is really a valid treatment philosophy. 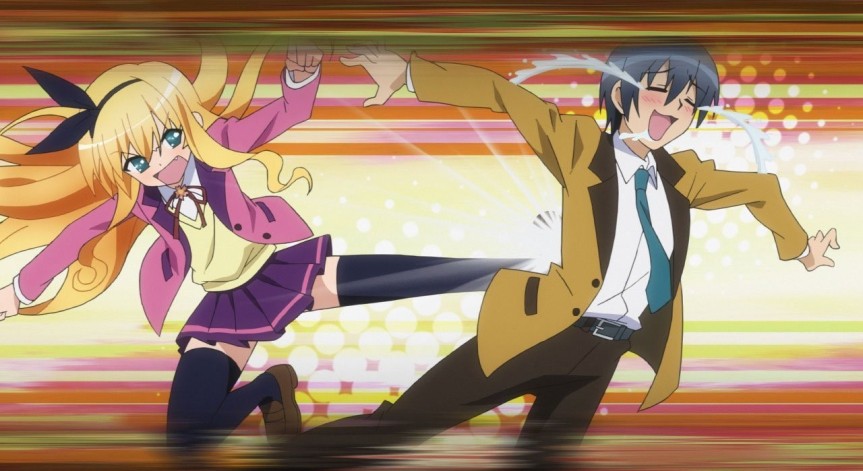 If that summary made you laugh or grin, you aren’t alone. MM!’s premise is funny as hell, and to some extent the series delivers on that promise. Mio is endlessly inventive with her methods to “cure” Taro (read: torment to the point of ecstasy), even if her success rate is questionable at best, and his reactions are just as funny. Despite the pervy subject matter, MM! also isn’t sexually explicit in any way – Taro’s turn-ons are represented by a dazed, happy look, nosebleeds, steam pouring off his head, giddy laughter, etc., and the series also features zero nudity. This is a comedy anime through and through – which in some ways is also its downfall.

The big problem with MM! is that while the comedy is fantastic, it flops in practically every other regard. This anime features no particularly unique characters, and they never get developed beyond their one-dimensional beginnings. Mio is a stereotypical tsundere who is only atypical in the violent intensity of her tsun (sour / angry) moments, and aside from the masochism thing, Taro is the same blasé good-guy male protagonist you can find in any comedy anime. 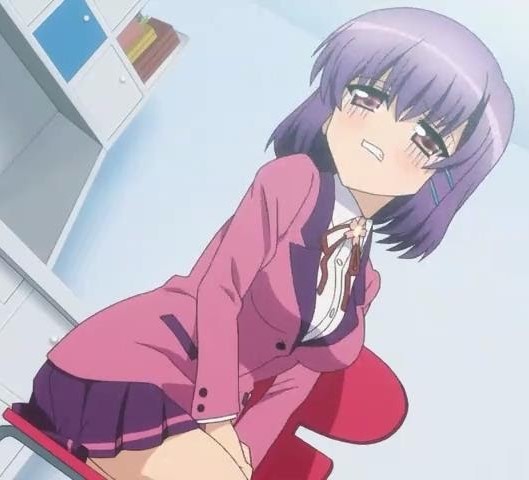 The only character who receives any development at all is Yuno, the androphobic girl. The series spends a lot of time fleshing out her backstory in the first 5 episodes or so, explaining why she’s afraid of men and building a believable case why she would fall in love with Taro. This is easily the best and most interesting part of the series – it’s touching, makes you feel like the plot is going somewhere, and makes you like the characters. The problem is that this forward momentum disappears after episode 5 and is never seen again. From then on, we mainly just have gimmick-of-the-week episodes that do show Yuno and Taro growing a little closer at points, but never anything significant. This makes the romantic quality of the first few episodes feel like a tease, and it might have hurt my enjoyment more than if it had just been straight comedy the whole way through.

We’re also clearly supposed to feel that Mio is Yuno’s romantic rival, but I just can’t see it. She’s obviously a bit of a sadist (in the clinical rather than cruel sense) who is forming a symbiotic relationship with Taro in which torturing him becomes a grand old time for both of them. (She’s the last one to realize this, until it’s pointed out to her great surprise in Episode 10.) I actually really enjoyed watching her and Taro interact, and weirdly enough, Taro and Mio reminded me a lot of Charlie Brown and Lucy from Peanuts in their confused relationship. She is definitely the smug bitch who pulls the football away every single time right as he’s about to kick it, but he keeps coming back to her for psychiatric advice year after year, so clearly he feels like she’s doing him good in ways that may not be easy to articulate.

With that said, the romance element was poorly developed with Mio. Taro has very few of the bonding moments with Mio that we routinely see him get with Yuno, nor were there enough moments where Mio saw him as anything more than an interesting pastime. In short, for a character who’s essentially the series’ mascot, Mio got unpardonably short shrift in terms of meaningful screen time.

The series is at its comedic best when it spirals down into a laugh-out-loud train wreck of ridiculous deviance. Two of my favorite examples of this occur late in the series. One is where Mio hypnotizes Taro’s masochism into a suppressed state, only to have him suddenly erupt into several other different types of extreme perversion. (It cannot be contained!) Another is when the mad scientist girl kidnaps Taro to “play house” – a game where the whole cast gets involved – and the whole business devolves into a messed-up soap opera where everyone right down to the neighborhood mailman is having an affair with Taro, “the father.” MM! also occasionally goes into straight parody territory, spoofing Dragon Ball Z on two occasions. This is a little funny and results in some classic one-liners, but overall this style of humor is flatter and less interesting than the harmless raunch that makes up MM!’s original material.

In terms of visuals and music, MM! is what I’d describe as “perfectly adequate” – neither impressive nor a letdown. The animation is middle-tier, though I will say the coloring is particularly nice – a lot of browns and deep purples that you don’t often see, and the effect is nice. For music, the background music is non-intrusive and bouncy without ever drawing attention to itself, and the ending tune is okay. The only musical standout is the catchy opening, “Help!”, which has great background visuals, a fun chorus line (“Chu-chu-chu-chu, to help you!”), and lyrics that are either funny but not cringe-worthy Engrish (“Je-sus Cri-sis Oh-My-Gah!”) or kind of sweet (“I’ll help you change your life philosophy”). There are two versions of “Help!”, called the “Hell” and “Heaven” sides. It swaps over about mid-series with new visuals, but the sound is similar enough that you might not even notice the difference aside from subtle changes to the subtitled lyrics.

Overall, MM! is pretty solid, but not everything it could have been. You will laugh to the point of tears at some points, and it’s always a fun watch. I just wish it could have spent its screen time a bit more wisely to do some actual character development in its later episodes to go along with its comedy. This is one I can definitely recommend as a streamed watch, but I can’t in good conscience recommend it as a physical purchase unless you find yourself much more impressed with it than I was.