If you see an anime, manga, or visual novel on this site that interests you, finding it may or may not be easy, depending on how rare it is and whether or not it’s out of print. I’ve prepared a few suggestions below that will hopefully help you pick up the title you’re looking for.

First, a quick plea: don’t be a pirate. 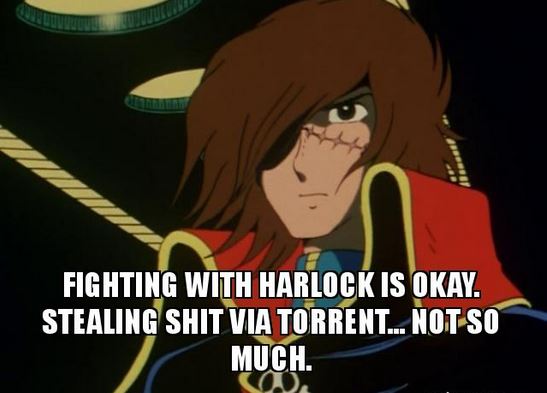 I know the economy’s tight, and everyone can appreciate the glittering appeal of “free.” Problem is, there’s no such thing as a free lunch. The companies that license, translate, troubleshoot, and sub/dub these products have to pay their employees and stay in the black. Moreover, anime and manga is a niche market, and most of these companies aren’t exactly making money hand over fist – they depend on fans to do the right thing to ensure they can keep bringing these products out.

If you can’t buy a series directly, an incredible amount of anime now streams for free online on companies’ official sites (supported only through fewer commercials than you see on TV), older anime whose license has expired may be on YouTube, and digital manga is a growing and usually more inexpensive way to enjoy your favorite manga series. There’s less reason than ever before to steal content. The only circumstances I’d condone getting an unofficial copy of a title is if it’s “long gone” out of print and being sold for ridiculous scalper’s prices on Amazon or eBay (in which case the company is no longer making a profit), or if it isn’t currently licensed or officially translated in the part of the world where you live.

In every other case, support the official licensed product, and do the right thing.

WHERE TO PURCHASE ANIME OR MANGA
(PHYSICAL COPIES)

This is the super-center of all things you might find discussed at this site. Their deals and customer service are both excellent – just a great company to purchase from all-around. RightStuf carries many older titles, and you can collect most of many older series from their clearance bin for quite a discount. (However, “most” is an important qualifier, as RightStuf seldom moves series into the clearance bin section until one or more volumes of the series are no longer available. Therefore, quite a few are incomplete, and you might have to look elsewhere to complete your collection.)

Robert’s Anime Corner Store is an excellent alternative to RightStuf that offers a similar array of products. I would recommend checking both places for pricing and availability before you buy, because RACS has some things in stock that RS no longer carries (and vice-versa). Their customer service is also phenomenal, and they’re known for packaging products carefully, snugly, and securely when they ship.

Excellent selection of products, both new and out of print

Anime Castle has been in the anime and manga business a long time, and consequently, they have an enormous stock of items to choose from. You will find a few out-of-print titles here that are impossible to find elsewhere, and to their credit, I’ve never known Anime Castle to engage in scarcity-gouging. Their only downside is that their online game isn’t very strong — you may note with puzzlement the “Flood Sale” from 2007 on the front page. Still, my orders have always been delivered promptly, so they take care of business.

Perfect for all older products (from new to ancient), some newer

If you just can’t find it anywhere else, eBay is your buddy. The online auction site should be your very first stop for any title that has long been out of print. Depending on the rarity of the product and the knowledge level of the seller, you’ll occasionally stumble across a real steal, or at least an excellent bargain. With that said, the nature of the site (all private sellers) does mean you’ll see some bootleg products from time to time. Follow the golden rule of piracy-free purchasing and steer clear.

WHERE TO STREAM ANIME

All of the sites listed below are 100% legal ways to watch anime online without having to fork over fat stacks of cash. All of them are free and supported only by advertising — far fewer ads than you’d watch on a paid satellite channel. You can also purchase subscriptions to skip the ads and gain access to premium content (especially English-language dubs).

CrunchyRoll is the closest thing the Internet’s got to a legal one-stop shop for free, streaming anime. Although they’re primarily known for their spectacular selection of brand-new anime, you’ll find a few older classics here as well.

HIDIVE is the streaming site for all anime licensed by Sentai Filmworks, and it has an interesting and convoluted origin story. Back in the mid-2000s, the now-defunct ADV Films started the Anime Nework to stream their shows, and it was the first serious attempt by an anime licensor at a fully online anime streaming site. After ADV’s 2009 implosion, Sentai Filmworks incorporated and picked up most of ADV’s properties, including ownership of the Anime Network. In 2017, Sentai spun their online streaming into a new company (HIDIVE) while leaving the old Anime Network with the rights to their smaller cable offerings.

Anyway, that’s a lot of history that may or may not interest you. Bottom-line: HIDIVE is an extremely cheap way to gain access to Sentai’s massive catalog (both dub and sub) of anime and live-action movies and TV/OVA series. It’s easily one of the best bang-for-your-bucks in anime today, and because of Sentai’s friendliness to short, quirky series, it’s an excellent spot to search for hidden gems.

There are many nice things I can say about Funimation, but for right here, the key thing is that if high-quality English dubs are your shtick, this is the channel you might want to fork over the extra subscription money for. Funimation dubs almost every title they license, and their experienced voice actors are some of the best in the business.

Aniplex USA is notorious for releasing outrageously overpriced physical editions of their anime titles that can run you (into the ground) about $80 for a 4-episode Blu-Ray. However, there’s no need to lose your shirt or turn pirate to watch their many excellent titles. Stream them here for free.

If you don’t see your anime of choice available from one of the ones I listed above, check out this exhaustive list, which contains many other sites that allow you to legally stream anime.

WHERE TO PURCHASE DIGITAL MANGA

The following sites are excellent places to purchase digital manga, either from the publisher directly or via online retail.

WHERE TO BUY VISUAL NOVELS

Fruitbat Factory is a publisher of many anime-ish games, many of which have visual novel elements while primarily being some other genre (strategy, puzzle, etc.). Their most famous titles are probably War of the Human Tanks and 99 Spirits. You can purchase these or their other titles on PC here direct from the company, giving you a DRM-free direct download as well as a Steam key for any purchase. Fruitback Factory doesn’t deal in eroge, and their site is SFW.

Steam is becoming a more and more happening place when it comes to visual novel sales, and you can find all-ages titles from all the major visual novel publishers here. In a few cases, you’ll also find all-ages “revamps” of games that used to have adult content where this content is now removed; these versions are often exclusive to Steam. There are also a growing number of independently produced “OEL (Original English Language)” visual novel titles or independently-translated titles ported from the Japanese.

JAST USA is the longest-running publisher of visual novels in the West, having been founded back in 1996. Their website carries download versions of all of their own titles, plus a growing selection of DRM-free downloads from other publishers. Note that while they generally do a good job of keeping explicit images off their front-page, a majority of their games have adult sexual content.

MangaGamer is the other major English-language publisher of visual novels, and they are also probably the largest in terms of volume at this point. MangaGamer sells download versions of all of their own titles, physical copies of some of those titles, and downloads of a number of third-party visual novels and eroge. While they do have a handful of all-ages games, most are eroge, and the site is definitely not safe for work.

J-List sells both physical and download copies of any visual novel produced by JAST USA, as well as all physical copies produced by MangaGamer and a few from the now-defunct Hirameki. Because J-List and JAST USA share the same man as founder and CEO (Peter Payne), J-List will have physical copies of newer JAST titles before anyone else.

NOTE: J-Box is an all-ages, safe-for-work version of J-Lists’s site that doesn’t contain any games or products with 18+ content. If you want to stick with games without explicit material, this is the version you want to browse.

Denpasoft is the publisher of the Sakura [Fill-in-the-blank] visual novels on Steam, Fruit of Grisaia, and several other and upcoming titles. You can buy all of their titles on Steam, but they can also be bought directly and DRM-free from their store, sometimes with additional features and content. Like JAST, they generally keep their front page clean, but you may run into explicit images while visiting the site due to adult content in the games.