It’s interesting how certain anime or manga publishers sometimes get a “lock” on certain creator’s works. Just as Viz had and has the rights to almost all of Rumiko Takahashi’s series, back in the 1990s Houston-based A.D. Vision (or ADV) achieved a near-monopoly on the works of manga-ka Go Nagai. I would be interested to know if this was founded on some sort of business arrangement with a Japanese counterpart who worked closely with Nagai, or if it was the result of some bigwig at ADV being a huge fan of his work.

Regardless, a “Go Nagai empire” was in many ways a strange choice of monopoly. I say this because Go Nagai is the reigning king of acquired taste and uneven results. Over the years, anime based on his work have generated some international smash hits (Mazinger Z, Cutey Honey, Devilman), some titles that gained niche appreciation but no widespread popularity on this side of the pond (Demon Prince Enma, Devil Lady, Kekko Kamen), and some truly wretched drek that is better off forgotten (Demon Lord Dante, Black Lion, Violence Jack). Good, bad, or ugly – complete or incomplete – ADV was on a mission to publish the anime adaptations of all of them. However, of all anime based on Go Nagai’s work and published in North America, perhaps the most obscure was the weirdo title Hanappe Bazooka.

Hanappe Bazooka was a 45-minute OVA that followed the misfortunes of a young man named Hanappe who gets roped into a way-too-close encounter with the demonic kind. Hanappe is a bit of a coward with terrible luck, and the anime starts with him trying to outrun a local gang. He ducks into a video store to escape, happens upon a pervy VHS tape, and covertly slips it under his shirt and takes it home. He watches it that same night, and in the middle of… doing what you do while watching such a tape… the sky becomes pitch-black above his house, a portal opens to an eldritch dimension, and these two come out: the demons Bazooka and Dance.

According to Dance, Hanappe accidentally performed an obscene rite during a cursed planetary alignment that opened a portal from the demon world. The ancient rite had the exact same motions as Hanappe dancing around with his **** out, and in Dance’s words, “When you came… so did we.” (Welcome to the world of Go Nagai, people.)

What follows is Bazooka and Dance making themselves at home in Hanappe’s home and striking up elicit (but surprisingly consensual) trysts with his mother and sister. In exchange, they try to offer Hanappe one demonic superpower after another – super-strength to destroy the gang, a ray beam from his finger that auto-seduces women, help getting closer to his crush – all of which backfire horribly and hilariously. In the course of these twists and turns, we discover that Dance and Bazooka are actually aliens from space, and humanity’s previous experiences with their twisted kind gave rise to lore about demons.

The state of affairs that is making Hanappe miserable is heaven to everyone else in his life, and his family, Dance, and Bazooka all mock his suffering and basically say Hanappe can go jump in a lake if he doesn’t like it. They push him too far, though, and Hanappe eventually does something shocking and tragic. The anime takes a surprising turn at this point as we find out that Dance and Bazooka aren’t as heartless as they let on, especially where Hanappe is concerned. They resolve to make things right with their erstwhile-victim, no matter the cost or danger.

In the end, Hanappe Bazooka is emblematic of what makes so many Go Nagai anime adaptations a goulash of the terrific and the terrible. On the plus side, this thing is batshit insane in terms of its plot, and I would have to worry about anyone who claims “I saw that coming” more than a few seconds in advance. I also really started liking the characters of Bazooka and Dance by the time the credits rolled. They’re certainly still mischievous, but in the end, the demons were the most human characters in the cast. (Kind of a Go Nagai trademark, that.) 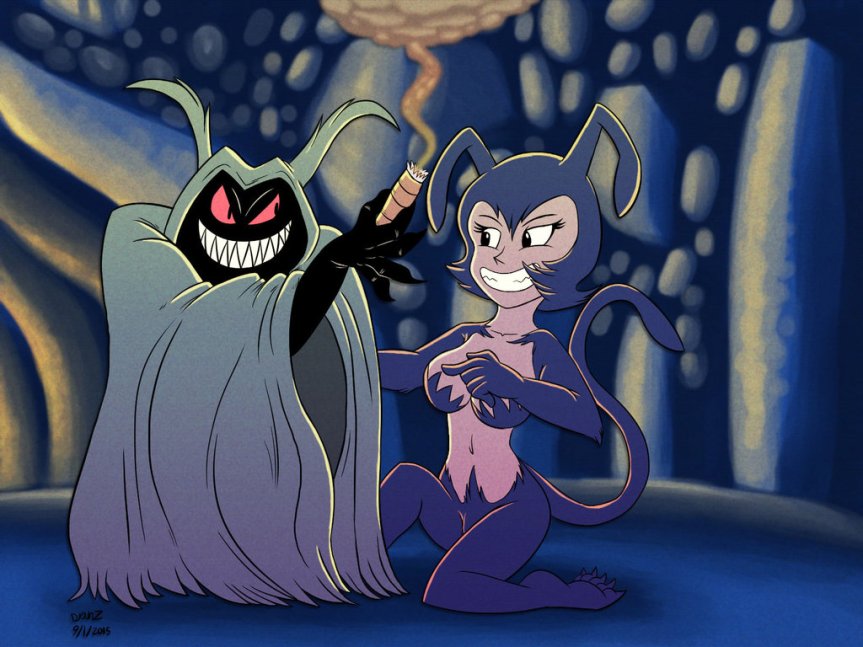 On the downside, this anime is badly rushed and utterly schitzophrenic in terms of mood. This anime jumps from being utterly horrifying or tragic to making cheap boner and fart jokes at a second’s notice. It also tries to include way too much in a 45-minute timeframe: we have a Hanappe’s personal struggles, his love interest’s pathetic backstory, information about the demons’ alien society, and a cosmic final battle all thrown at us far too fast to do justice to any of these themes. I get the strong impression these are problems with the anime adaptation rather than Go Nagai’s original manga, though. From what I’ve seen, it was more light-hearted throughout, and the plot progressed at a much more leisurely (and sane) pace, letting things play out in monthly installments over 3 years as opposed to being crammed together in 45 minutes.

Two last quick things to mention… First, it’s important to note that despite Hanappe Bazooka’s seeming randomness, it borrows a huge deal from Rumiko Takahashi’s Urusei Yatsura, which was published the previous year (1978 versus 1979) and became a smash success. Urusei Yatsura introduced the concept of extraterrestrials influencing mankind’s conception of demons (there, the alien oni / ogres), and the fact that we have another alien-demon girl chasing a horny-but-unfortunate guy who looks just like Ataru Moroboshi seems like more than just a wild coincidence. Still, Go Nagai does make the material his own – Bazooka and Dance are notably more demonic in attitude and presentation than Lum, the material is gleefully irreverent, the humor is more defiantly childish, and the ending is weirdly touching despite all the nonsense that came before it.

Lastly, if you happen to get your hands on ADV’s old VHS tape (the only official release of Hanappe Bazooka in North America to date), be sure to keep watching after the credits roll. The VHS has a really fun featurette showing the voice actors and actresses doing their thing, a little directorial discussion about the anime adaptation and storyboard, and Go Nagai himself making a voice-acting cameo in the OAV. (His nervousness over his three-second role is funny and endearing.)

And that’s it! Hanappe Bazooka isn’t one of the best or most essential Go Nagai anime out there, nor would I pay more than $25 or so for it unless you’re a very determined completionist. That said, it is fun and a genuine example of “anime obscura” that you can out-hipster your friends with. Check it out if you get a chance.